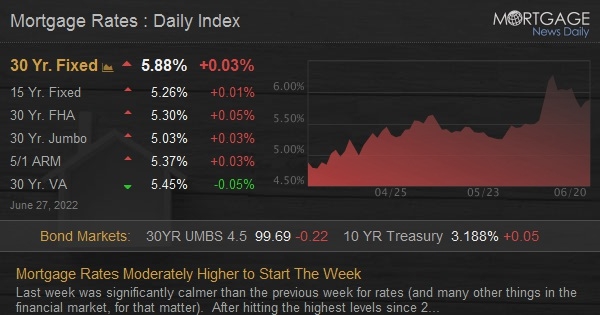 Last week was significantly calmer than the previous week for rates (and many other things in the financial market, for that matter).  After hitting the highest levels since 2008 on June 14th, rates lurched lower through last Thursday.  Due to idiosyncrasies in the mortgage bond market, certain scenarios saw some of the best single-day improvements in years, depending on the day.

Gains gave way to losses by Thursday afternoon, and a gradual rise has followed.  The average lender isn’t anywhere near as high as they were in mid-June, but neither are they as low as they were in the middle of last week.

As has been the case many times during the 2022 rate spike, there is a much higher degree of variation between lenders compared to more stable times for rates.  The average lender was only moderately higher when it comes to mortgage rate quotes today.  Notably, the bond market suggested a bigger jump.  The actual jump may have been smaller due to more conservative rate-setting strategies among mortgage lenders on Friday afternoon.