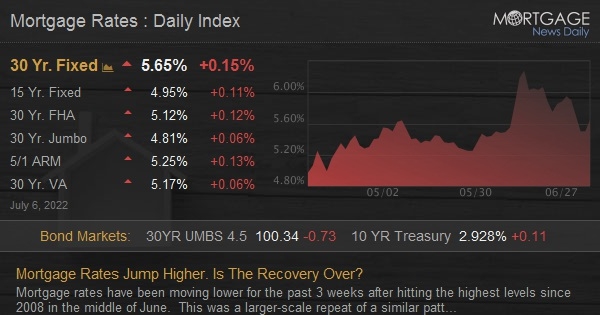 Mortgage Rates Jump Higher. Is The Recovery Over?

Mortgage Rates Jump Higher. Is The Recovery Over?

Mortgage rates have been moving lower for the past 3 weeks after hitting the highest levels since 2008 in the middle of June.  This was a larger-scale repeat of a similar pattern that played out in the month of May.  Taken together, these patterns suggest the rate market is broadly trying to find a ceiling after 2022 began with 6 of the worst months on record.

The bad news is that there’s really no way for rates to justify a huge, ongoing drop.  In order for that to happen, we’d need to see several successive months of lower inflation (the key sticking point for 2022’s rate volatility).  In other words, the best we can really hope for is for rates to move down to the bottom of some to-be-determined range as they wait for inflation data to vote on whether the good times could keep rolling.

All of the above is particularly relevant on a day like today because it is by far and away the most qualified candidate to serve as the bottom of the aforementioned range.  Actually, it would be Friday filling that role because today’s rates moved noticeably higher (by at least 0.125% for the average 30yr fixed scenario).

That doesn’t mean rates couldn’t turn around and move lower again.  But it does mean that last Friday’s lows may be hard to break for now, all other things being equal.  At the very least, this is the best evidence we’ve seen so far that the broader, sideways rate range has found a floor.