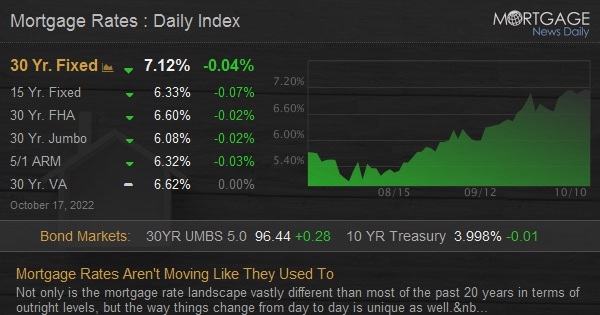 Not only is the mortgage rate landscape vastly different than most of the past 20 years in terms of outright levels, but the way things change from day to day is unique as well.  In the past, we could generally observe broad-based changes from one day to the next.  If borrowing costs were rising for one rate, they were generally rising for all rates.

That’s not always the case these days.  On many occasions recently, costs have moved higher for lower rates while simultaneously moving lower for higher rates.  If that is confusing, make sure you understand the following generalities:

With the rapid rise in rates in 2022, the underlying market structure that allows lenders to offer lower costs at higher rates simply hasn’t been ready to accommodate the flood of higher rate loans.  Time and stability help thaw that liquidity.  This means that costs may remain fairly flat at lower rates while improving gradually at higher rates.

This also affects conventional and FHA/VA loans very differently with the latter being slower to see the thaw in higher rates.

Why would you WANT a higher rate?  You may not.  You may look at the cost to remain at a lower rate and decide it makes sense, but as the cost associated with higher rates comes down for lenders, it will allow borrowers to avoid paying higher upfront costs.  And upfront costs on some scenarios are as high as they’ve been in decades.

As for today specifically, we didn’t see too much of this discrepancy between higher and lower rates (for a change).  Costs fell across the board (i.e. rates moved lowers) with the day’s first rate sheet offerings, but many lenders raised costs in the afternoon in response to market conditions.  Even after the afternoon hikes, rates were still in line with, or slightly lower than Friday’s latest levels for the average lender.